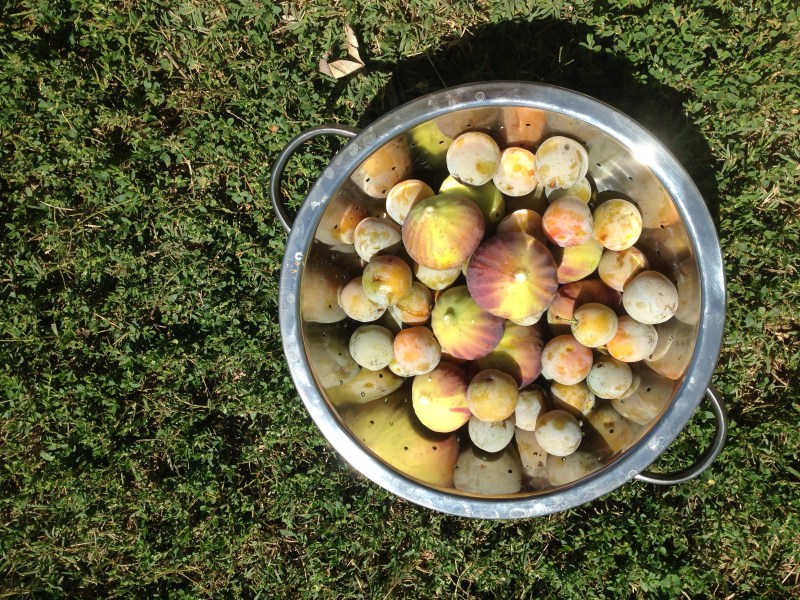 A few years ago, a friend decided to plan, organize and carry out her wedding with the help of friends and family; no expensive dress, no professional wedding planner, no caterers. In late August, a group of us convened in Provence, where a zealous sun had left the riverbeds chalky white and the parched garrigue exhaled odors of warm thyme and rosemary. The southern fruits were ripe and I tasted my first hand-plucked purple fig.

After a breakfast of coffee, croissants and bread, the preparations for the next day’s dinner started. Marine hadn’t slept. “J’ai trop de choses dans ma tête,” she said. She was radiant in a burnt orange dress, an embroidered pattern dancing down the front. Boxes of tomatoes and cartons of fresh mint were dispatched to half-awake guests for chopping. The quantity of dishes and the milling about reminded me of Thanksgiving preparations: never enough hands, too much ambition and yet, somehow it always comes together.

In the kitchen, the Italian woman and Marine’s friend from childhood were cracking walnuts with small hammers. Two German women were peeling garlic. Marine had spent her college and young adult years travelling and studying abroad. She’d kept in touch with many of the people who had been her travelling companions of a week, a month, or several years.  Many of them had flown in from several time zones away to celebrate her next journey. The question I heard most often was, “French or English?” and the response, “English, or better yet, Spanish” (or Portuguese or German, or…).

The mint for the sautéed zucchini had gone to flower and had to be sent to the compost. “It would have ruined the whole dish,” said Maxime’s aunt. After tossing the wilted bouquets on a pile of humus in the making, I followed Maxime’s mother to her orchard: a fig tree, two mirabelle plum trees and a red plum tree. “When we came here it was an empty field,” she said, reaching into the branches to squeeze a fig. Over the last fifteen years, she and her husband had created a small Eden flourishing with fruit trees, raspberry bushes and a vegetable garden. Little buddha statues peeked out from among the foliage.

She showed me how to shake the trees to collect the ripe mirabelle plums. I wrapped my fingers around the warm bark and shook, sending a rain of firm dusty yellow orbs to the ground. When they’re ready, they fall, she explained. I’d never gathered fruit this way before, and I shook each branch gleefully, feeling the occasional mirabelle bounce off my back on its way to the ground. I fondled purple and green figs, twisting the plumpest off. They looked like tiny swollen breasts, a drop of milk seeping from where the stem had broken from the tree. I ate one in every five fruits I picked, unable to resist the sugary, sun-baked flesh.

When my vigorous shaking no longer sent mirabelles raining to the ground, I tottered triumphantly back to the kitchen with a sieve full of figs and plums in my sticky hands, ready to turn the late summer harvest into a marriage offering.

Next Notes from the road: Auvergne

Previous Notes from the Road: A night in Chamonix